The Spanish term sobremesa refers to the time after a joint meal, when people stay around the table and conversations evolve. On January 18 2020 we will  Catarina Martins (Porto) will be our guest at the education cuisine. We look forward to conversations about historical research in arts education!

In the last years, my focus of research has been the formation of the arts (particularly the visual arts) as a curricular component within education in Portugal, since the end of the 18th to the first half of
the 20th centuries. I have been doing that through a governmentality approach in which the arts in education were linked to the formation of a modern western nation (meaning ‘civilized’) and the making of the child as a citizen of that nation.
Two fundamental aspects were analyzed, that form basis of my current project:
At the sobremesa, I will be situating my current research project on the history of the making of the creative child during the long 19th century. My goal is to understand how the discourse of the child as a creative being came to the scene in western arts education and has been framed as part of the specific ‘nature’ of the child. This ‘nature’ (i.e. the senses as opposed to reason) encountered a
terrain for its development in progressive arts education, mainly by an expressionist approach in which the child should be maintained in conditional freedom in order to unleash her creative potential.

In order to access the ways in which the imagination of the child was naturalized as a biological property of childhood, in its hopes and fears, it will be necessary to situate how the western child was being conceived within modernity as part of the history of mankind, as developing in time, and as closer to nature.

The project is in its beginning – since this year, I have been mapping the travelling of the idea of the creative child across certain nations and disciplinary fields. For now, my archive is focussed on the
discursive practices of North American and European art educators, pedagogues, psychologists and anthropologists. 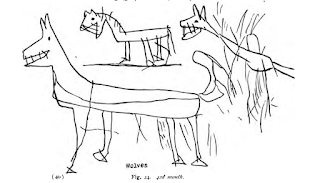 Catarina Martins is a Professor of Arts Education at the Faculty of Fine Arts, University of Porto, Portugal. She is the coordinator of the LabEA – Laboratory of Research in Arts Education at i2ADS. Her interests lie in arts education histories from a post-structuralist, critical and post-colonial perspective. Her current project is focused on the making of the creative child through arts education practices and the epistemological violence and current reverberations of this invention in contemporary arts education.